Apropos of the naming of this blog, the yogurt aisle at the “big” HEB along Main Street is no less impressive than any other aisle devoted to a single foodstuff, but as a moniker it would not have inspired thousands–or the 22 of you–to read its contents faithfully.

Not only does yogurt have its own aisle, true to form for people who actually wear their yoga pants to shop in, it has its own stand-alone island, facing the front of the store. It is somewhat cloistered, like a yoga studio on the second floor of a downtown building that has a jewelry shop on the retail level. The back of the yogurt island faces a meat canyon, which defines the store’s footprint on the eastern side and forms a tsunami-like wall threatening to engulf the yoga pants-wearing shoppers should they stroll to close, having narrowly escaped the Jimmy Dean sausage shallows to the south.

(I don’t know why I equate yogurt and yoga, beyond their similar sounds and I seem to recall a 1970s TV commercial about a woman sitting in Lotus position eating Dannon.)

The limited shelf space in New York City would have meant we’d have maybe two feet wide on each of three or–if we’re lucky–four shelves that would constitute our yogurt selection. (See photo below, indicating precise comparison of HEB yogurt aisle breadth–exceeding my iPhone’s lens–to a typical NYC allotment, in green. The island extends another foot or two to the right.) 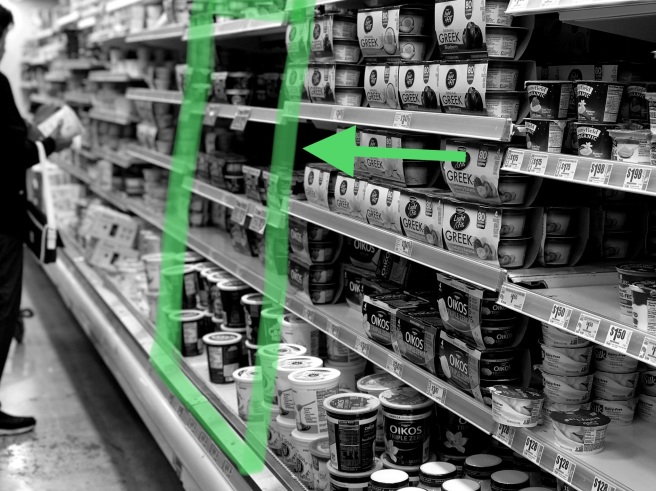 And do you see that person looking at a container of yogurt?

In New York, they would be in the way and taking way too long. This would be universally understood as a violation.

When I first started shopping at HEB (and, yes, I know there are hyphens between the letters; I just don’t feel like adding them in), I carried a plastic basket rather than pushed a cart. I still do on most visits. I did it partly as an act of protest against, say, driving a Suburban when I could ride a bicycle. And I did it for exercise. And yet, carrying around a quart of strawberries, two Texas-sized baking potatoes, some bananas, two pounds of ground beef, a half gallon of milk, a pound of butter, a bottle of ketchup, 16oz. of yogurt (yes, I was there for a reason), and one or two other items…I mean, are you counting? We’re up to like 15-20+ pounds and dragging that around for what feels like two football fields.

The good news is that between the produce section in the northwest corner and the dairy in the southeast there can be numerous stations where staff members are offering prepared samples of items available nearby.