My nearby meeting yesterday evening wasn’t starting for twenty or so minutes, so I wheeled my car into a diagonal slot along Water Street, in front of Baublit Jewelry. (What a great name: Baublit. Reminds me I need to name this $650 Ford Contour before it gives up its ghost. Since each day driving it seems to be its last, and since I feel grateful to have it another 24 hours, I think she will be called “Grace.” Maybe Gracie, to make it a little more personal. Gracie it is. Also one letter different from the Italian for “thank you.”)

This activity was ok for about 3 minutes.

That’s all I have on this. 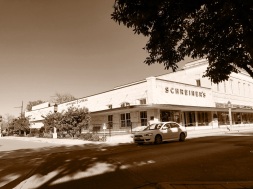 Schreiner is a name one sees everywhere when first visiting.

Local pools were our daily routine when the boys were younger: the Municipal (“Olympic”) Pool, Inn of the Hills, Lions Camp, and Schreiner U.

Looking south on Water, near where I saw the early morning human, or gazelle, or armadillo.